From to , Piccone was the executive director and co-founder of the Democracy Coalition Project, a research and advocacy organization working to promote international cooperation for democracy and human rights globally. He was also the Washington office director for the Club of Madrid, an association of over former heads of state and government engaged in efforts to strengthen democracy around the world, and continues as an advisor. Representative Bob Edgar from to Piccone has authored or edited multiple volumes and articles on foreign policy, Latin America and human rights.

His research currently focuses on the evolving role of five rising democracies in the global democracy and human rights order. Do you have info to share with HuffPost reporters? US News. World News.

Network Analysis Inbound Links 1 1 Total. One of the lingering questions in that domain that, in my view, deserved more time and analysis was how the United Nations human rights system works and how it can be improved. If we could identify, in some empirically valid way, the key factors that shape respect for human rights at the national level, we might be able to derive a host of important recommendations for strengthening the international community's role in the process. I was particularly interested in the work of the UN's independent experts on human rights known in UN parlance as the special procedures , who had drawn so much praise and a fair amount of criticism for their activities.

Their work had attracted more attention than usual in in the context of the negotiations to abolish the Commission on Human Rights and to create a new and more elevated Human Rights Council. Exasperation and outright hostility toward both the commission and the council from the Bush administration, Capitol Hill, and other governments only heightened my interest in examining in more depth the tricky intersection between universal norms and practical implementation of such norms at the country level.

I was drawn to this issue for several reasons. First, I knew from my own experience and further research that sound, empirical studies of the role of the special procedures and the effectiveness of this mechanism on the ground had never been published. Second, I was convinced that the main challenge to the international human rights community is, as UN High Commissioner for Human Rights Louise Arbour declared, implementation, implementation, implementation.

While new human rights norms may need to be developed in some areas, the main human rights principles, protocols, and procedures have already been conceptualized and codified in customary international law and in treaties that have been signed and ratified by most governments. The real challenge now is to figure out how the international system created since the end of World War II can be more effective in influencing states to promote and protect human rights for all.

Third, given the intensity of the debate around creation of the council, and knowing that its work would be reviewed after five years in , I felt there was an opportunity to contribute something meaningful to the discussion. Thus began a nearly four-year odyssey to conceptualize and design a valid method for evaluating the effectiveness of the forty-year-old mechanism of independent UN experts on human rights and to compile the results in a digestible way. As explained in chapters 1 and 2 and the methodology note in appendix G, we first had to get our arms around the vast quantity of reporting by special procedures that already exists in the UN system.

We also sought to zero in on two critical tools that the independent experts use to carry out their mandates: country visits and written communications to states. After hundreds of hours of laborious examination of the quantity and quality of this voluminous reporting, we were able to derive some solid conclusions on the most important factors that shape the effectiveness of the mechanism.

To validate and elaborate on these findings, I carried out five field trips and multiple visits to Geneva to talk firsthand with a wide range of more than stakeholders, from frontline human rights defenders to top-level diplomats; I also interviewed dozens of special rapporteurs themselves to get the qualitative input indispensable to telling the whole story.

In the end, I believe the book captures the essential truths about how this unheralded system of independent experts serves as a catalyst for human rights and, in so doing, about the wider phenomenon of the universalization of basic human rights principles. The book is organized to help guide the reader efficiently through this collection of original material in a concise yet comprehensive fashion.

After introducing the political and historical context of the subject, chapter 1 serves as a primer on the special procedures system—its genesis, proliferation and institutionalization, and recent developments and challenges. Chapter 2 presents the core findings on effectiveness as derived from our research on the independent experts' country visits and communications. Specific examples of the impact of the special procedures are provided in this chapter, along with dozens more in appendix D. Chapter 3 examines the unique nature of special procedures as independent experts operating under the banner of the UN blue flag, underscoring the invaluable role this rare combination plays in understanding its effectiveness.

I then delve into other key factors that shape the mechanism's ability to succeed: the quality of experts' work chapter 4 , the approach taken by states in engaging them, at times in a positive way but also often with hostility chapter 5 , and the activities of civil society and other third parties in the give-and-take of international human rights diplomacy chapter 6.

Chapter 7 looks at the future of special procedures by offering a series of recommendations for strengthening the mechanism, particularly steps to address its dearth of follow-up mechanisms and insufficient resources. I am grateful to so many people who helped make this project a reality.

Brookings president Strobe Talbott has been a steady and stalwart supporter of the idea of doing more public policy research on questions of human rights, humanitarian affairs, and foreign policy. He, along with Martin Indyk, vice president and director of foreign policy at Brookings, and his predecessor Carlos Pascual, now special envoy and coordinator for International Energy Affairs at the U.

Department of State, played an essential leadership role in backing this effort. Michael O'Hanlon, senior fellow and director of research in the foreign policy program at Brookings, gave a thoughtful critique of the draft and, with Mary Fox, coordinated the external review of the manuscript, including evaluations by two anonymous reviewers for whose wise advice I am especially grateful.

I was very fortunate in carrying out the project to have the guidance and advice of an outstanding experts advisory group of practitioners, academics, lawyers, and activists listed in appendix A who helped me to work through the conceptual framing, methodology, and factual details of the report and ultimately to endorse its recommendations.

I can't thank them enough for their active participation in our meetings and online and always friendly and constructive input. We learned a great deal by partnering with Jim Goldston of the Open Society Justice Initiative and Jean-Louis Roy of UPR-Watch on a two-day conference in Geneva examining issues of implementation and follow-up of the treaty bodies, special procedures, and universal periodic review mechanisms.

Christian de Vos, Jonathan Burnham, and Youmani Jerome Lankoande made critical contributions in making the most of the gathering. 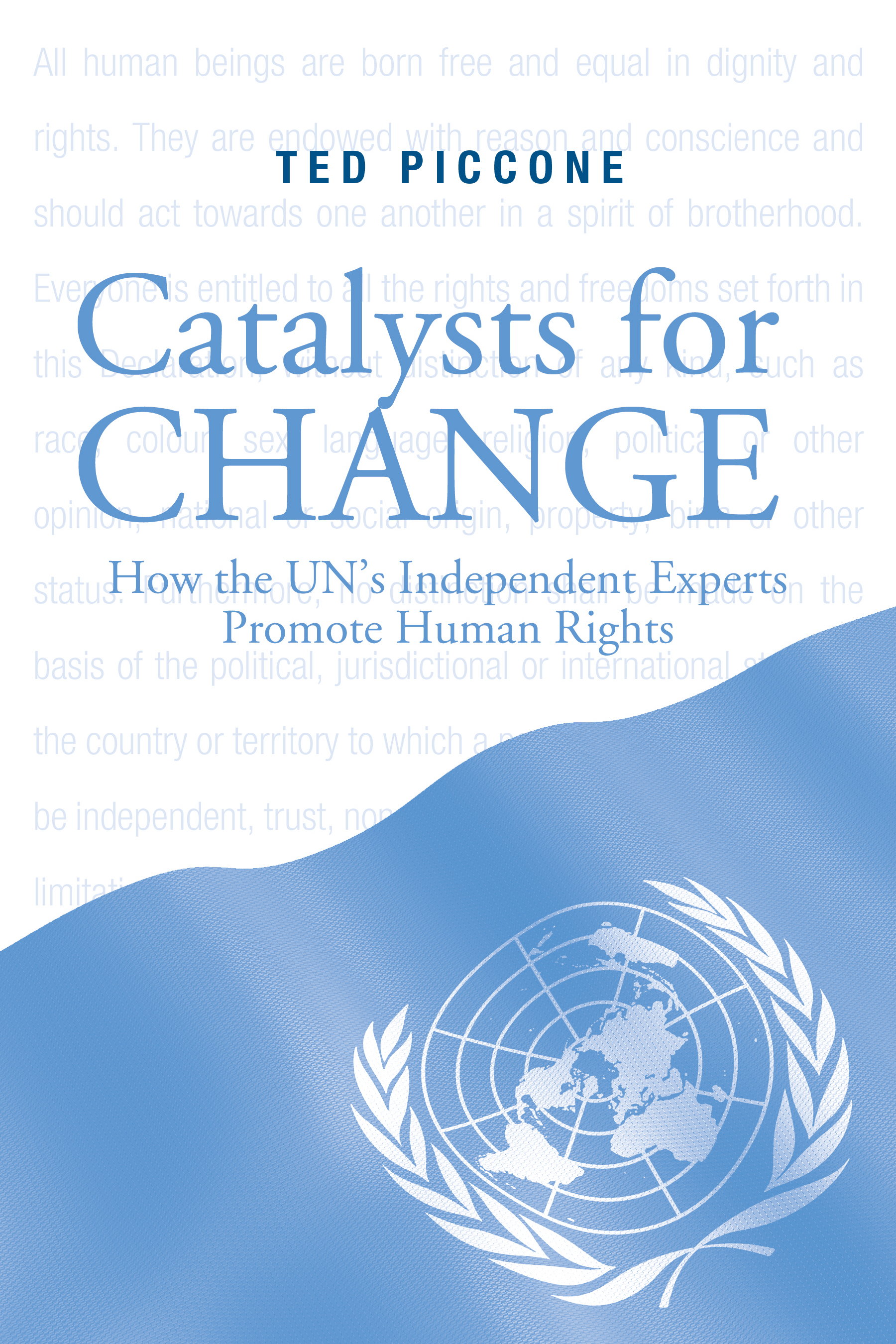 A summary of recommendations from the conference can be found in appendix H. To do an objective evaluation of how governments respond to the special procedures, we had to analyze the public written record, which is voluminous.


In making sense of it, I had the invaluable assistance of my stellar senior research assistant, Emily Alinikoff. On this and so many other details from a to z, Emily made things happen, brought new ideas, created innovative ways of analyzing and organizing data, organized multiple trips and interviews around the world, and trained and coordinated a fantastic group of top-notch graduate and undergraduate students. I am especially grateful to Nicholas Marwell, who helped me conceptualize the project, and Christopher Le Mon, who did excellent work on methodology.

No intensive research project like this could happen without the vision and financial support of our donors. I am especially grateful to the Embassy of the Netherlands in Washington, led by a real human rights leader in the diplomatic community, Ambassador Renee Jones-Bos, and political counselor Robert Dresen for their early and enthusiastic endorsement, as well as Maryem van den Heuvel, Edwin Keyzer, and Peter Potman in The Hague. I am also grateful for the support of the John D. MacArthur Foundation for its support of research activities and publication of this book. Support from the Connect U.